Bob Le-Roi and Steve Szmidt sent detailed reports. Nicholas Wythe (images 25 to 42) and again Steve Szmidt (images 01 to 25) added lots of pictures. Many thanks to all of you!

To start with, here�s what Bob Le-Roi wrote:

What an amazing day spawned following a visit by Andrew Austin and me to an always-superb Radio Day in Holland, always hosted to a high standard by my good friend Hans Knot.

Driving back from Holland Andrew and I "kicked around" the idea of staging an event in the UK. The idea soon gathered momentum with Andrew seeking potential venues, whilst I thought about the shape and form the programme might take and whom might be asked to appear.

Certainly it was an arduous task for us both. Due to its convenient central location we plumbed for The King Charles Hotel in Gillingham, which had a variety of suitable rooms, offered accommodation for those travelling from afar. Bar snacks and main meals were available from reception, despite many not working that out! There was also a beautiful swimming pool for residents.

Andy Riley the Auctioneer of the day

Auction of Honda generator cap (from the Mi Amigo)

Auction of Honda generator cap (from the Mi Amigo) 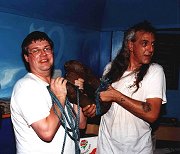 The only thing we hadn’t considered was the weather which was untypical and scorching hot, whilst the ventilation system resembled that on the Navy forts, a damn great big fan in the decibel range of Gardener Generator pushing out noise but not much in the way of relief from the heat!

Many hours work and masses of phone calls to old friends produced a workable programme, not only covering all the decades that Caroline has been broadcasting, but an impressive list of those that had pioneered the spirit of offshore broadcasting in the UK.

Soon the now tagged "Radio Caroline Convention 2000" was being promoted on air via Caroline, on Martin’s offshore-radio.de sites and in the trade press. Impressively the hotel became fully booked and more than 90% of guests agreed to appear, sadly some only arriving in time for the evening social.

Although invited Johnny Walker and Andy Archer declined, as they were both on holiday. Johnny though gave the event his blessing and a plug on his BBC Radio 2 programme. Even playing the Swinging 60’s "We Love the Pirates"!

The day of reckoning duly arrived with masses of people coming from all over the UK and the continent. After a swift introduction of welcome and "stage setting" the proceedings got underway with a slide presentation of the early years, the first fort boarding and a step through the early years.

Frank Turner author of the Maunsell Forts series gave a presentation on the development, building, and siting of both the Navy and Army Forts. Frank had an impressive display of models, a huge photographic display along with a range of his books for sale. Also in attendance the Caroline Mechanise stall reporting brisk business.

Click on the pictures to enlarge: Bob "Buzby" Lawrence

The interviews provided entertaining information among those "quizzed" former colleagues from the early days like Dick Dixon who along with Dick Palmer provided an insight into living and working on Shivering Sands, Knock John and the Tongue Forts. Dick Palmer was pressed to recall the day the Mi-Amigo breached caving in a porthole as a consequence. John Hatt (aka John Aston or John/Chris Stewart) who’s worked as a news man and jock gave a pr�cis of his time at Essex/BBMS, King Radio, Radio 390 and Caroline South and North.

Charlie Wolf performed in his usual "fever pitch" way giving his views on the current state of broadcasting in comparison to the "heady" mid-80’s Laser period. How similar things are today, what a pity the Sea Act’s in place!

The first viewing of the video shot by Peter Moore showing the Ross being towed from Granville Dock in Dover to the River Blackwater in Essex took place with unique footage showing the ship under tow flanked by Dave "The Fish" in "Fairwind" was deemed to be highly entertaining.

Interviews continued with words from Don Scott and John Harding describing the delights of working onboard the Jeanine the Radio Atlantis vessel.

Returning to Caroline, Johnny Lewis spoke of the atmosphere aboard the original Caroline ship the Mi-Amigo in his guise as Stephen Bishop along with some of the silly stories that have gone around regarding the antics shared onboard the ship.

Mike Barrington as engineer extraordinary explained his reason for spending over twelve months continuously on The Ross Revenge. Mike laughed off having his ear bent about the state of the engineering bench on occasions in the transmitter hold!

Kevin Turner got somewhat mucky when pressed into recalling the cleaning of "The Heads" at sea, colourful or what! Kevin also introduced me to Mark Devani an avid Caroline fan from Italy who was incidental in persuading BBC breakfast Television to join us for the weekend. Much footage was taken both during the convention and the following day on the Ross with a good amount televised on the Monday with Andy Burrows as reporter cameraman with shots of Peter Moore, Alex Hamilton, Rachel Hunter and myself included in the feature.

Bob Lawrence, Nigel Harris and David Foster shared some memories of their times at sea and all talked about the current satellite service.

A great supporter of Offshore Radio over many years Stuart Payne of the Evening News reminded me of some of the close encounters that we’ve both enjoyed!

Mike Plumbley explained his involvement in the day to day running of Caroline during the 80’s and his own thoughts on music programming for the future.

As an entertaining interlude of an auction with MC Andy Riley of radio collectibles and items with traceable providence was held raising funds for the support of Caroline. Items ranged from a part of a Mi-Amigo generator, original 60’s Radio City headed notepaper and QSL cards, turntables, ship’s chain, and fashioned and carved decking from the Ross Revenge. Redundant equipment from the World Mission Radio Studio, Monique records, and 558 chart songs, books and other interesting donated items were all snapped up by eager punters. What a great job Andy did, fun, entertaining, and profitable.

Whilst Caroline’s founder Ronan was in attendance he declined a stage interview, but did condescend to a short interview which was broadcast on the Sunday. Peter Moore was interviewed as a conclusion to a long but fruitful day. He gave his own views for the future and echoed his delight at the turnout and magnificent support the listeners have continued to give over the years.

A good number of guests arrived after the "wrap up" of the days official proceedings to participate in the evening’s social gathering, they included Tony "Haggis" Campbell and Andre Hardy the current boatman to the Ross was in attendance throughout the whole day. Andre was never seen without a full beer glass, he does a fantastic job and is a great guy just to have around. Former engineers Peter Chicago, Stuart Vincent, and DJ’s Glynn Richards, Barry Lewis and Jim Ross also joined the party that finally concluded at 01.00 am.

Conclusions: A lot of hard work but from reaction a well worth while venture.