At 00.01 BST on the 1st October Radio Caroline will once again burst on to the medium wave band. 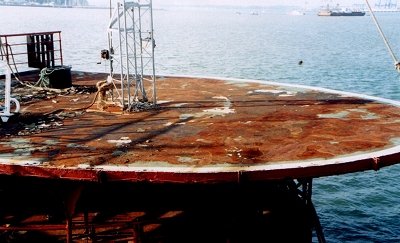 The last four weeks have seen an enormous amount of activity on LV 18. After the RNI RSL the old girl was put to sleep with us not knowing whether she would ever host another broadcast. The future looked grim and we all felt that it had been her last RSL. Neglected she became a target for vandals who broke into her and caused some damage. The three pictures are supposed to show the state of the helideck when we returned to the ship. Then 50% cleaned and finally ready to paint again.

However, the future now looks very bright indeed with the prospect of the ship having a secure future for the next few years, at least.

The Caroline guys have transformed the ship and not just small improvements. We now have hot and cold running water, showers, heating and she has been cleaned from stem to stern. 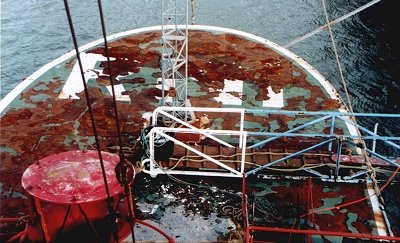 The best addition to the ship is the new mast, well new for the ship anyway. It is a very sturdy affair in three sections with the option of adding a further two bringing its height up to around 80 feet.

The transmitter is ready to go on 1503 kc/s (199 Mts.) The power is significantly more that before and the quality is superb, we hope to get a good signal into Holland. John Day has organised the whole event and has worked his fingers to the bone getting everything in place for next Sunday. Whilst, at the same time assembling a transmitter that works and will stay working with just a flick of the 'on' switch. We will also be on the Internet.

The main studio has been moved to the bridge to reduce the RF feedback problems we had earlier in the year. I have never seen so many knobs and dials before in my life. In the old RNI studio is now a fully equipped production studio.

We now have a boarding gangway so there is no need to clamber up and down ladders or chance your life with me in the rowing boat. Visitors are very welcome.

We have an international paint manufacturer who has agreed to supply us with the correct primer and paint to redo the helideck.

We have sponsorship from several record companies and an electronic manufacturer is supplying us with broadcasting equipment.

The Caroline guys have really "done the business" for this RSL and should be very pleased with themselves.

The broadcasting schedule has not been finalised at the moment but you will all be very pleased to now that I will be presenting a real heavy rock program each night. Do I hear people losing interest in droves?

Radio Caroline took to the air at 0001 hours on 1st October 2000 with test transmisions, there was a short break around 0130 hours to allow modifacations to be carried out on the equipment, tests continued until 0900 hours when broadcasts officially commenced on 1503 khz. Reception reports have been received from Lincolnshire, Kent, Sussex, Norfolk and Cambridgshire as well as the Netherlands, Belgium, Germany and France. Reception is slightly improved to that of RNI in April. The internet stream is now active thanks to KeConnect in Ipswich.

The Daytime format is proving quite popular with the locals and the nighttime Rock format has been well received as well. The signal strength has been constant throught the first week with very few problems although continuous music was aired for a time during the first few days of the broadcast to allow for some work to be completed on the new studio which is situated on the bridge.

Presenters on air during the first week have included Simon "Chippendale" Clark, Phil Mitchell and Colin Lamb on Daytime Programmes with Barry James, John Platt and Dave Kent presenting the nightly rock shows. weekend presenters have included Paul Dennis, Johnny Diamond and Clive Boutell. More presenters are due to join over the next couple of weeks including Victor Hartman who was last heard on the RNI rsl in April and presented some rock shows on Caroline 558 in 1990.